Because of Covid rules and uncertainties caused by Covid the exhibition planned for 5-8 November 2021 right on the Museumplein in Amsterdam has been moved to Eastern 2022 ( mid April 2022).

Ronald is also involved in Moon gallery, an international collaboration to create and bring art to the moon. A group of artists, including Ronald, create small pieces of art which will be attached on the lunar lander. After a successful landing it will be the first work of art on the moon! More information on the project: www.moongallery.eu 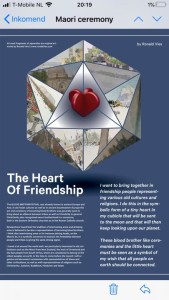